A lengthy “top off” restoration of a historic instrument for a New York performer is Mike Asetta’s current restoration project. The instrument requiring attention is a rare American Standard double bass from 1937, the second year of production of these instruments by H. N. White Company.  This instrument is the 273rd American Standard bass, built by a company with a reputation for their superior tone and high quality.  Bass production began in 1936, eventually the company was sold to Kay Bass Company who closed production of this competing firm.  This American made bass is highly sought after and copied by recent makers including Wil de Sola.

When brought to Mike’s workshop the instrument’s top had degraded, caving inward. The edges were ragged and the finish was highly worn from use.  The instrument was studied, giving respect to its provenance.  Decisions were made in collaboration with the owner on a restoration strategy, with an eye towards maintaining a modern playability usage of the instrument.

Previous restoration attempts included nails through the top and neck!  An “Asetta” restoration honors the instrument and ensures each operation done may allow for future repairs, in other words, what is glued must have the possibility of being unglued many decades from now.

Contact Mike Asetta for the maintenance and restoration needs of your string instrument, at 860-685-1621. 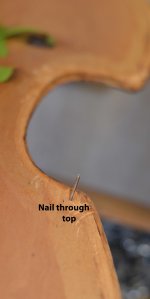